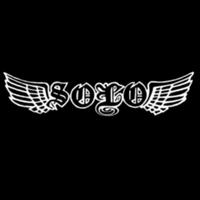 Once again we soundly contemplate another of SOLO's works, this time we have an album more inclined to the ambient sound achieved thanks to a special guitar effect that makes it sound deeper. The riffs are too monotonous but retain some of the punk style, it should be remembered that this punk is a more friendly and less aggressive way as the musical genre is usually classified. Something that can be observed in this and later recordings is the simultaneity of high and low sounds with bass guitar distortion. As for the song, this is shown at the beginning of the album as a bit bitter and as the songs go by you can see a change towards a more optimistic version which makes us doubt much about the true affinity with punk, so It is more prudent to classify this album as an alternative rock. Download From jamendo
Publicado por Lord Mysticus en 12:50